One thing has become clear. Karin needs her chiropractor.

All the walking in National Parks has aggravated Karin’s hip, and we needed to get to a Gonstead Chiropractor, and the nearest we could find was in Las Vegas. While she managed getting medical files from home down to the clinic in North Las Vegas, I was charged with finding somewhere to stay.

And it turns out the best place to stay with your RV in Las Vegas is, and I did not see this coming, the Clark County Gun Range.

I know. Who knew?

Turns out the Clark County Shooting Park (calling it a gun range is selling it way short) is the largest shooting complex in the country, if not the world.   Las Vegas is in the bottom of a big bowl, and Clark County has built this facility to the north of town just as you begin to rise out of the valley.  It’s the very last thing before you reach the Mojave desert and the Desert Wildlife Refuge reaching up to the northern hilltop. It’s unlikely any more building will happen nearby.

When they put in the trap and skeet lines the county also built a long line of full RV hookups.

Once shooting is done, its a quiet, secure, place to stay with full hook ups, great cell coverage. In the morning you get to see the sun hit the red rock mountains to the West.  If you’re into Vegas, you’re only 14 miles from the strip. It’s not my thing, but to each his or her own.

It was perfectly placed to get Karin to the chiropractor for an adjustment.

With Karin “adjusted” we decided to head for Sequoia and Yosemite National Parks….by way of Tehachapi.  That meant joining the schlep of folks leaving Las Vegas to the South on the main highway to LA.   Before turning right at Barstow, we came across the solar power plant where there are acres and acres of reflective mirrors focusing light on a central tower where the sun’s rays concentrated to heat water, make steam, and drive generators.  I’ve seen pictures before but to see it in person is amazing.  There are so many mirrors concentrating the light that you can see it all coming together around the towers.  I assume it’s lighting up dust to make it look like this.

We stopped in Tehachapi again as it’s a great waypoint between the Mojave Desert and the Central Valley of California.  The little RV park along the glider airport is away from the town and noise of the freeway and allows you a front row seat of all the action in the sky.  All day Sunday gliders were being towed into the sky and the after 10 minutes of soaring they’d silently swoop in for a landing right out our back window.

We also happened to land in town the weekend of the Tehachapi Apple Festival…which was small town fun at it’s best. 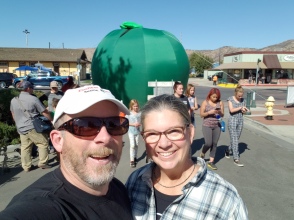 Yes, that last photo is Karin buying me a piece of apple TehachaPIE. I suspect Tehachapi will be a regular stop for us when ever we head East via the Southern Route.