So, what do you do when someone wants to buy your boat and you are a million miles away? Ok, not a million really… but in the wilderness of Northern BC.

In the immortal words of Douglas Adams: Don’t Panic.

We’re not talking about our current home; Endless Song, but about Marie; our 1981 Hinterloeller Niagara 35. Marie has been on the sales dock at Marine Service Center on Lake Union since we bought Endless Song.

Lots of looks at her in two years… but the bite finally came when were were waaaaay far away…. with bad cell service… and that only occasionally.

We floated by a First Nations village and had cell coverage for 15 minutes and got an email that someone who had come to look at her 3 times was ready to offer. A day later, another village and 15 minutes coverage, and there was an offer sheet. We slowed the boat, downloaded the PDF. Opened it on the phone, signed, saved, and sent it to the broker. Amazing tools we have these days.

Another day or so and we got to Bella Bella. Real phone coverage for a few days, so we could call and talk to our broker. The deal was on, moving to survey and sea trial. Normally the owners will be there for that, but the folks at Marine Service Center said, no worries. They’d handle that.

So we continued South, waiting to hear results. Somewhere North of Cape Caution we got word of a few minor issues, but again MSC worked on getting one fixed, and we lowered the price a bit to cover the rest. All in all, fair deal for all.

The deal is submitted to Marine Title service. Just as when you buy a house, there is a lot of checking of titles and paperwork, and legal documents that the Coast Guard cares deeply about.

So by this time, we’re around Cape Caution… headed into the Broughton Islands. We stopped at Sullivan Bay Marina for a night. No cell coverage… but I know they have some wi-fi. There should be final paper work in my inbox at some point.

Now, a moment here about wi-fi at little marinas in the wilderness. It usually sucks. And it makes sense really. You have hot stuff wi-fi at your house. But what if 50 big RVs pulled up, surrounded your house, and asked for your password. They’ve all been driving around looking at mountains and have no phone or internet connections (except those really big white RVs, that are more like small hotels. They have domes on top for TV and internet.) You put up a sign that says, “Sure, check email and IM but be considerate. No Skype, facetime, photo uploading, or streaming video or music.” Right.

To be fair, most folks are nice… and behave. But it only takes a few. So getting up at 5am, making coffee… then wandering down to the picnic tables where wi-fi works is a winner.

And they are in the inbox; the final papers to sign and close the deal.

Here’s where being in the wilderness really is a problem. First, we need a printer. Then we need a notary. These are legal docs, and need the stamp from someone who says, “yep, Karin and Dan signed these.” And once signed, these originals have to get to the Title Team in Seattle. Scans or photos don’t do it. They need the originals.

So, at dinner that night… we got the last two tickets for BBQ…we were seated with another couple. Lovely folks, Teresa and Don from Edmonds. They are on a pretty wooden Grand Banks power boat. Great dinner, wine, and chatting about our summers. We got around to the story about selling the boat and our need to find help. Don smiles at Teresa, she looks down at her plate for a second, smiles, and says, “I’m a Notary, and my stamp and a printer are on our boat.

You have got to be kidding me. Randomly, at dinner in the middle of nowhere, I have found the Wilderness Notary.

Much laughing followed. After dinner we pulled the docs off the phone to a USB drive, went to their boat, printed them all, and signed and had Teresa notorized them. We paid with wine.

Now we have signed documents. Next issue, getting them to Seattle, fast.

We knew the was a Post Office at another little marina in the Broughtons, Pierre’s Echo Bay. So the next morning we sailed over. After tying up, we ran up to the office. We missed the mail plane by 30 minutes. Next one… in a week. Ok, this isn’t going to work.

So much as the new owners wanted to take the boat and the kids sailing, every one was going to need to be patient. We could go back North to Port McNeil, or just keep going South…and make an unplanned stop in Campbell River. Either option would delay closing a week. So rather than backtrack, we headed South.

Midday on Monday the 13th of August, we tied up in Campbell River and walked to the UPS store. The team there said no worries. Docs will be in Seattle by 10 am Wednesday.

And they were. Since we had emailed copies of the docs to Amanda at Pacific Marine Title she was ready. By 11am she sent us email that the deal was closed, and we were no longer owners of Marie. That afternoon I was able to log into my bank, and the funds were already in the account.

Amazing the technology we have today. In the past this would have taken weeks. Now, the deal was done, and last weekend the new owners took their kids and went sailing on their new sailboat…s/v Marie.

Love that boat. I hope we run into them in an anchorage one day soon. 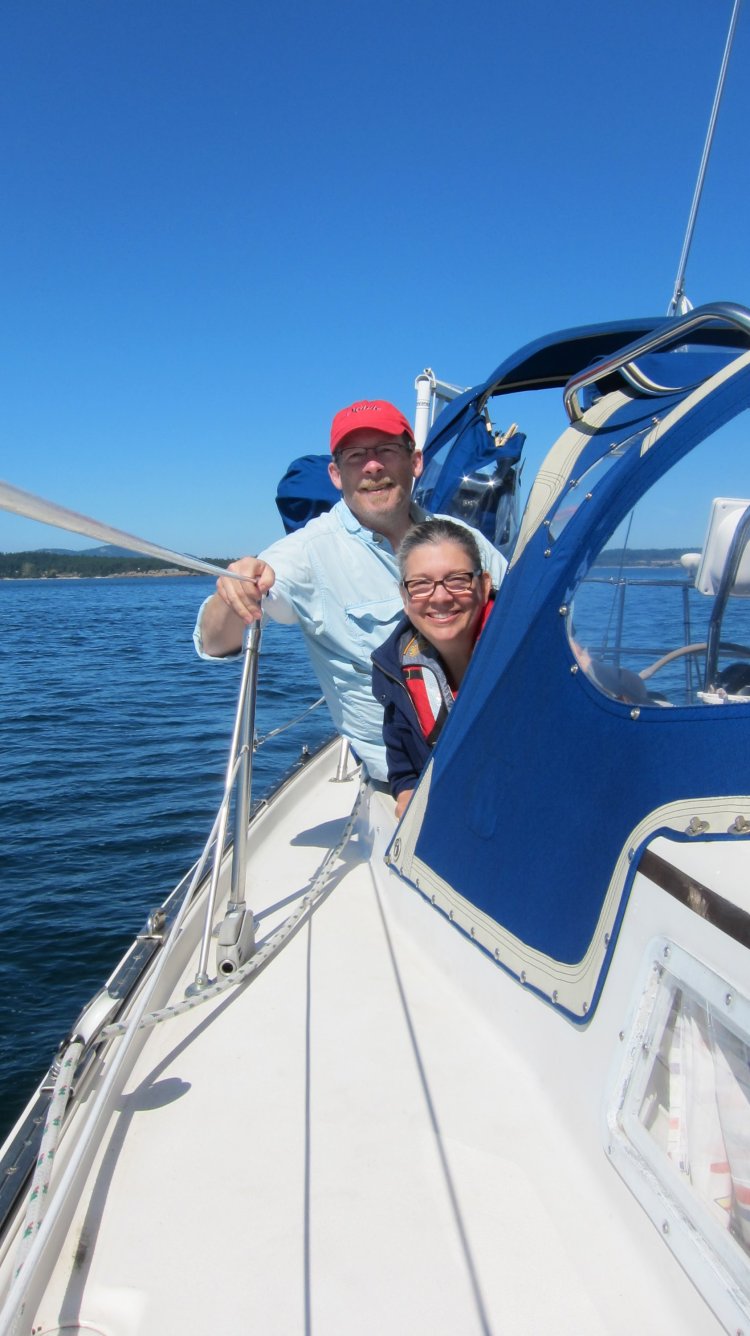 7 thoughts on “Selling a boat in the middle of nowhere”