So we’ve cruised to Alaska. Seen amazing sites. Glaciers, whales, dolphins, bears, mountains, America’s Fjords in both BC and Alaska. And yet, we’ve really only scratched the surface. We had the odd mechanical issues. Overcame those. And a floatplane dropped us back on the boat after a week in the lower 48 at a family campout in Idaho. (For details on the Summer of Indy, see us on Facebook). 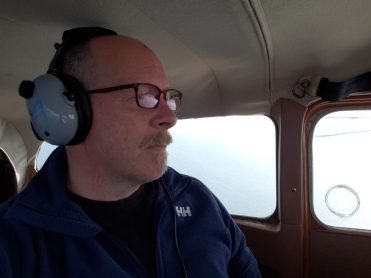 But now comes that time to turn for home.

There are a lot of emotions, issues and questions that go along with that moment. First, since we changed the transmission, and that took some slight adjusting of engine position. But even slight change means new sounds…and questions. Did we do it correctly? The boat, systems, engine and new transmission are running fine. But I know, and this is Dan speaking, that I’m going to be worrying about the engine/transmission systems as we go South. It’s not going to ruin my trip, but I want to have 100% confidence. I’m running about 95% at the moment. Despite the technical issues, Karin was quite sad to leave Alaska with so much yet to see.

It was odd to arrive back in Ketchikan almost 7 weeks after arriving in Alaska. We’ve seen so much, developed a few opinions about places, and what can we say? Ketchikan is not our fav Alaska spot. You have to stop there to clear customs, and resupply. You do the odd laundry. This stop was different though as we couldn’t wait to get away…from the cruise ships and tourists mostly. Last time through, we did wander downtown. This time, the heck with that. It’s nothing but tourist traps and jewelry stores. Who goes on a cruise to Alaska, gets off, and goes jewelry shopping? I mean those boats have three jewelry stores aboard. Whatever.

We couldn’t wait to point South for Foggy Bay….and Dixon Entrance…the US/BC border. Did I mention we were heading for Foggy Bay. Man! You hear about fog in late summer up here….and we found it as soon as we started heading South. It was foggy out of Thorne Bay where we had stashed the boat while in Idaho….and it only cleared as we were in the channel approaching Ketchikan. Then leaving Ketchikan….it was foggy most of the way to Foggy Bay. And it was supposed to have a little clearing wind on the border. But that never showed up, and it was light wind (no sailing) and fog all the way across the border. It only cleared up in Venn Passage, just 7 or so miles from Prince Rupert.

A little word about Prince Rupert again. As I said, we’ve developed “opinions”. Of the towns we’ve come to in Alaska and Northern BC…the Prince Rupert is one of the best. It’s pretty. It has lots to see and do. It has all the resupply you need….and very close to the marinas where visitors stay. There are great restaurants and a good brewery. And there aren’t many cruise ships that stop by, and those that do are smaller.

So now we head South, down into the long channels that make up this part of the coast. We’re making a point of staying in different anchorages, mostly, that we did on the way up to see more of what’s here….and note where we want to come back.

Did I mention fog? Yeah, we’re finding that here too. But is usually clears out in the afternoon sun. So one system on the boat that is getting a workout is the radar….and yes…these new radar systems really work well. (Thank you B&G/Simrad). It’s nice to be able to see boats big and small coming at you in the gray mists.

One thing that we didn’t have on the way North were horse flies and hornets/bees. After July 1st as it started warming up, so did the bugs. We have bug screens for our three hatches, and screens on all our opening port lights. What we really needed was netted panels for our cockpit enclosure. So we sent a note to the good folks at Iverson’s, and behold, they make these too! When we get back home we can mail our panels that we want to have netted panels made for and they’ll send them all back to us with the snaps and zippers all matched so they are interchangeable. Sailors, this is a must! In the meantime, we have used our bug zapper with relish.

Ok, here’s another lesson we seem to keep learning. I hope today’s sail from Hartley Bay to Bottleneck Inlet is the last time we learn it. There’s a thing called wind against current. It sucks. When the wind is going one way and current is going the opposite direction it makes steep choppy seas. It’s uncomfortable at best, and dangerous at worst. Think sailing in a washing machine.

So you would think…hey, just don’t do it. The problem is you may be sailing all day in perfect sunny skies and going with the current…say from Hartley Bay South. Then at the last part of your day, the current changes. If the wind is up…you have issues. And the problem with the inside passage is that you have this big long section in the middle where good anchorages are few…..and the wind always come up in the afternoon.

As we left Hiekish Narrows into Finleyson Channel, the current turned….and of course….the wind came up. Ick. It made the last 6 miles to Bottleneck Inlet that nasty washing machine thing. And it took two hours to finally battle into the entrance to the inlet.

Now the good news is that the boat performed like a champ, couldn’t care less about the bobbing around and the salt spray washing over the whole boat. Honey Badger Passport 40 is like that. The other good news is that bottleneck cove is peaceful and quiet, and Karin makes a mean cocktail to calm down the boaters. Wine with dinner….yet please.

Reminder: Plan your routes and dates so you don’t do that current/wind battle. We did it once in Rosairo Straight, once in Malespina Passage and now this. I swear…I’m done. I’ve learned.

Shearwater is a resort about half way down Northern BC, and it’s always a pleasure to pull in somewhere that has food, fuel and a mechanic if you need one. Since we had work done in Alaska, and Dan is still a nervous Nellie, we had Jay…the same mechanic who helped us out here in May…come over to the boat to look her over. Someone needed hug from an engine guy.

Jay found a slight fuel leak in one of the four injector pump fittings, and that was the reason we’re smelling a little fuel at the end of a long day. Jay says it’s 30 minutes to take the pump out, three weeks to send it somewhere to be fixed and re-timed, then another 30 minutes to reinstall it. But Jay also said it’s a tiny leak, it’s not impacting the engine, we have absorbent pads in the bilge pan catching everything, and it will NOT keep us from getting home. His final comment was, “It could run like that for 2000 hours and not be an issue. Just deal with it this winter.”

Shearwater was also where we ran into our friend Marty. He and his wife sailed to Alaska this summer too, but we never crossed paths…until Shearwater. He’s sailing south solo as his wife Deborah still has to work…at least some. Nice to find your friends on the water. 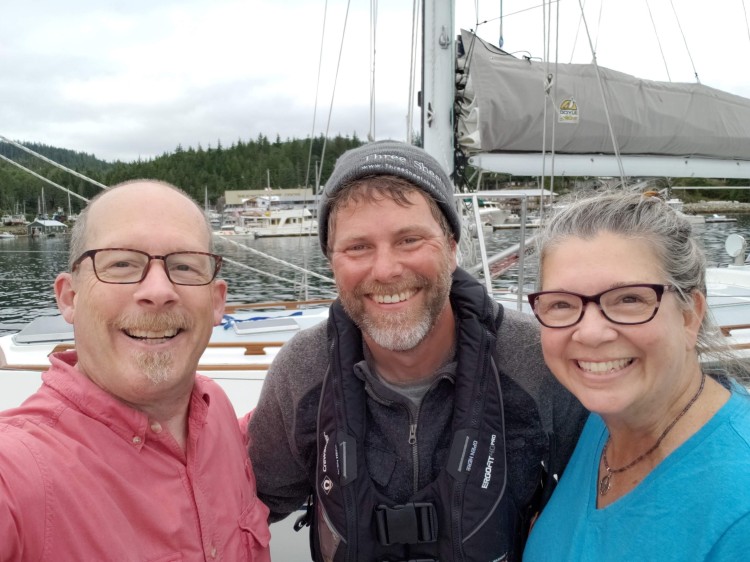 So onward South. The goal now is to play a little at Pruth Bay again….but really to get down and around Cape Caution and into the Broughtons, where we would like to explore a little more. These are days you discover all the Fog that can sock you in here in August. As we ran South, much of the time was spent in the pea soup, with 1/4 mile visibility or less. As I think I mentioned before, love the Radar.

Finally we made it around the Cape…again in fog…and into Sullivan Bay in the Broughtons. We can refuel, rewater, and get ready for some exploring. Funny how life tweaks your plans. Someone finally wants to buy our old boat! More on that to come….but ask yourself this. How do you find a Notary and sign sales documents when you are in the wilderness? Once you solve that problem….how to you get them airlifted back to the boat title folks?

2 thoughts on “Time to Head South”