Tick, tick, tick is the last sound you want to hear from your transmission when you are somewhere deep in Southeast Alaska….80 miles from anywhere.

As they say, it’s a boat…and eventually some thing’s going to wear out. Since this is a 33 year old boat, that is even more likely.   And just to make sure we’re prepared we have all kinds of spares; bilge pump, bilge switch, hoses, belts, water pumps for engine and for the water systems.  Lots of spares.

One spare you don’t typically carry is a full transmission. So, of course, what is the part that’s going to start acting up? 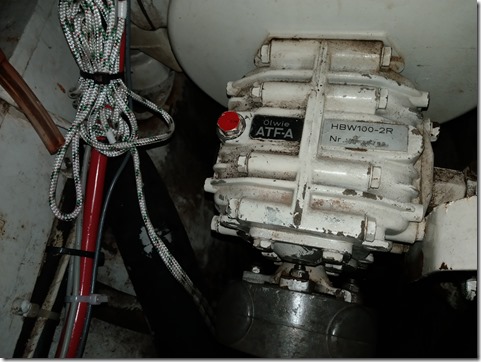 It started in Petersburg. Pulling out of a slip, I put the engine in forward and it didn’t seem to go into gear. As I was throttling back, it popped into forward.  I went out into the channel and tested forward, reverse, forward, reverse.  Seemed ok.  So we left.

A couple days later, over by Chatham Straight it did it again, and for a short time there was a ticking noise.  Dangnabbit…as they say. While it still went into gear…something was not right…and we were 85 miles from Sitka on the backside of Baranoff Island.

Now transmissions are funny things. They work. They can fail.  They can fail all at once, or they can gradually get worse.  Around Puget Sound, The San Juans or the Gulf Islands there is lots of help you can call.  Yea TowBoatUS and SeaTow.  Deep in the bays, coves and straights of SE Alaska those things don’t exist.

But you’re a sailboat, you can just sail.  Hmm, right. The problem with that theory is that summer winds in the bays and channels are fluky and often light, or the wrong direction.  What’s more, you may be deep in a tricky anchorage with twists and turns through the rocks to get out.

You need a motor.

Given all that, Karin and I realized we needed to get to Sitka. We were in gear, moving forward and we didn’t want to take it out of gear until we were just a few miles from Sitka…and help.  So we left early on a sunny Wednesday and motored North up Chatham Channel, into Peril Straights, and down toward Sergius Narrows.

The Narrows 25 miles North of Sitka were the tricky bit. They can run to 8 knots and we needed to wait until the current dropped to 2-3 knots to be safe.  Luckily, Deep Bay just North of the narrows is long and straight. We made 3 long slow runs up and down the bay to burn time, and wait.

Finally just before 6pm the current had dropped enough for us to pop through and head for Neva Straight down to Sitka.  Then the fog hit.  Of course.  But that’s why we have radar….so we picked our way past a bunch of longliner fishing boats in the channels down to an anchorage about 10 miles Northwest of Sitka.

We dropped the hook in a cozy corner west of Krestoff Island, and slipped the boat out of gear.  We knew that if we couldn’t get it into gear in the morning at least help wasn’t too far away, and we had phone service to call for it.

Of course that means everything worked fine in the morning and we motored into Sitka, found moorage and worked with a bunch of local folks until we found a mechanic who could come help us figure out what was up.

Stan Lapapa is a mechanic and a fisherman.  We’re just glad he is here.  We both played with the transmission, slipping it into and out of gear.  Most of the time it worked fine….but every once in a while we’d find a “catch”. A position where it didn’t want to go into forward.  If we twisted the shaft a little, then it would pop in.

That means something in there is worn, broken, pitted…whatever. It also means it could work for a while….or it could break tomorrow.  As I said…not good in deep SE Alaska.

OK, what’s the plan?  Well, here’s where it hurts to have a Nanni converted Mercedes engine.  No one here has worked on one. Who knows what parts we needed.

Then it dawned on me that I know the best transmission guy in the NW; Mike Voht at Harbor Marine in Everett. He rebuilt the transmission and V-drive on our old boat 8 years ago. So I called him on Monday morning the 25th, explained I had a 35 year old Hurst transmission going out.  He laughed a little, and said that’s bad…they don’t make that anymore. Crap.  Of course then he said, “But I have 13 VF12M transmissions sitting on the shelf that are almost a perfect replacement. You only have to move then engine up 3/8 inch on the mounts…and the prop aft 1/2 inch.”

Nice!  We talked about rebuilding, but his point was that it was going to cost almost as much to do that as buying new….and it would still be old.  And it would take time. Buying a new one means that with a $50 Goldstreak delivery on Alaska Airlines it could be here overnight (they phone just rang, by the way…it’s here).

The only drawback was that it would be a good idea to put in a new damper plate, and he didn’t have that.    Hmm, who has that.  I did find one in the UK, thanks Manfred….not this time.  Then I punched the part number into the search engine….and the first name to come up was PYI in Lynnwood.  Wait a minute, I know these guys too.  I used to contact them all the time for customers needing new stuff.

So I called and talked to Phil at PYI, and he said, “Hold on, you’re working with Mike up at Harbor.  Lets hang up, I’ll call him.  We’ll figure out the plate you need and get it to him today….so it can come with your transmission. 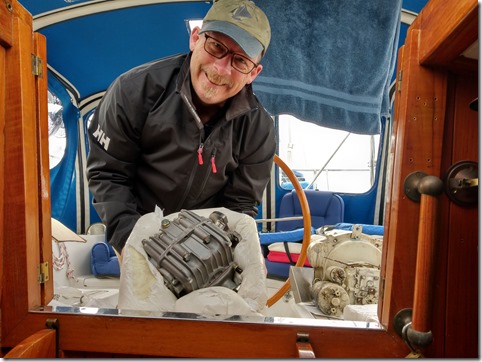 So with all the parts, Stan has put the system back together. We’ve spent a week getting to know Sitka….which we like. Best town in SE Alaska from our POV.   We also spent some dough….but not really much more than if we had to do this in Anacortes or Seattle. Mostly about $200 more for shipping….but really, that’s not too bad.

So now we’re mobile again…and off once again on our summer adventure. Of course, I check those bolts on the engine bell housing a lot…such to be sure nothing’s rattling loose.