OK, so we’ve actually been off for several days now. We are sitting on the hook here at Galiano Island, thinking about when to charge across the Straight of Georgia to Vancouver.  Then we realized, oh maybe we should write something so these first days are not just a hazy blur in August. 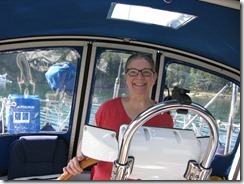 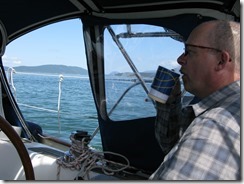 We left Tuesday, May 1, and it feels like just another summer vacation (ok a little cooler from a temperature POV). We’re out and about in the San Juan’s. Only this time….we don’t have a return date until September.  I suspect that it really won’t feel massively different until we get further North, to places we’ve never been before.  We love the San Juan’s and the Canadian Gulf Islands…but we also know them. 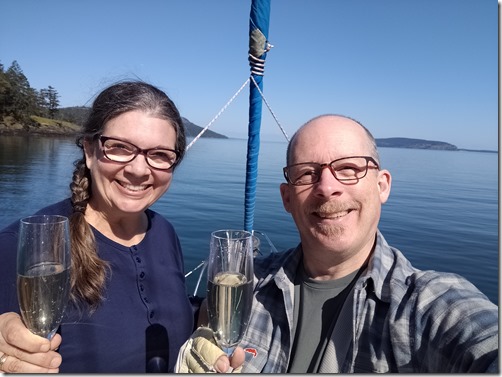 First night was on a State Parks buoy at Jones Island, North Cove.  It’s a favorite spot, and hard to get into in full summer with all the other boats. Day 2 we crossed into Canada and checked in at Bedwell Harbor. Once cleared, we sailed around the point to Port Browning on North Pender Island.

It’s a cute refuge, with a public wharf where you can tie up free for 2 hours and walk about 3/4 of a mile to a pretty good grocery, bakery, liquor store, etc.  It’s good to walk after being on the boat for two days. 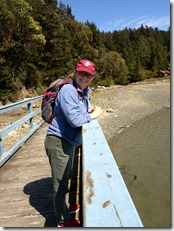 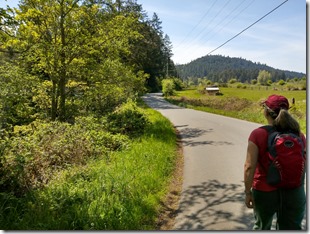 Karin, what’s it been like being on the boat that long?  This was not a hard walk at all but longer than I was expecting or wanted at the moment (so yes, I grumbled about it).  However, once we got to the retail center and got a chance to do a bit of reprovisioning it turned out to be a nice jaunt and a much needed stretch of the legs.

Overall, its taking me a bit of time to acclimate to being underway.  I’ve been quite sore going up and down the companionway and pulling lines etc.  But sleeping great if not a little hard.  That gently rocking at night and exposure during the day is a good combination for sleeping long and well each night.

I did try to do a bit of boat yoga (aka boga) because I’m pretty stiff.  The hardest part is finding a smooth spot to lie down and not whack a hand, foot, or head.

Day 3 we sailed through Plumper Sound and around to look at the harbor in Ganges.  If you’re checking in on our tracker map at all, you’ll see that it looks crazy in this area.  That’s because, in addition to looking at Ganges, we also looked at a number of coves on Pender Island’s NW side.  High winds from the SE were forecast….and Ganges is a great harbor…but it’s open to the SE.  So after taking a look, we headed by to the quiet cove called James Bay on Pender Island where we tucked into a tiny bay….and slept like babies.

Thursday we popped over to Ganges again and tied up to the public wharf so we could go shopping at the grocery and have lunch at the pub.  Getting off the dock was a little hairy as there was a 13 knot breeze down the long harbor, hitting us right in the back on the dock.  We had to pop off the dock,  using reverse to hold us against the tail wind, then gun the throttle to have the power to make a sharp 180 degree turn though a narrow opening of boats. Endless Song is a great boat with many fine qualities, but nimble turning in tight quarters is not one of them.  And the wind was pushing hard the wrong way.

One of her good qualities is heft. So once I got her moving the right way, she told the wind to stuff it, and plowed right around the corner and out into the main harbor.  Once around the corner I could finally un-pucker.

Once clear of all the traffic, we popped the head sail and it was a gentle sail over to Montague Harbor on Galiano Island for another quiet night on the hook.

Oh, random thought of the day.  You all know we love Endless Song….but one day we will be too old and fragile to hoist sails all day.  No worries….here’s the type of boat we’ll move to when we’re done “sailing.” 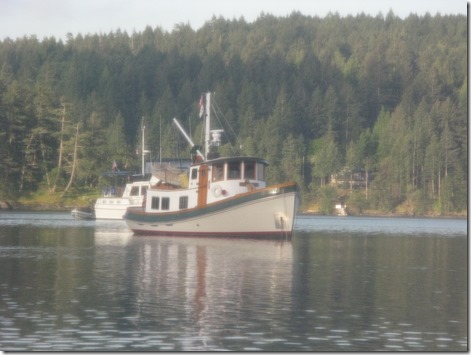 This is a Lord Nelson Victory Tug. This one is next to us in Montague Harbor this morning. Funny thing is, we walk past this boat almost every day on the D dock at Anacortes Marina. Her name is “Hiaqua” and clearly, I need to meet her owners.

So that’s it for now. Next up, we’ll cross over to Vancouver to see David and Lang Lavigne. They live on our dock in Anacortes, but have been up here for a few months for David’s work.  We’ll resupply, then push on North.

4 thoughts on “WE ARE OFF TO ALASKA!”