Spring’s been a blur this year.  It seems that the new year just started and bam…it’s Memorial Day. Summer season formally under way.

Karin and I started the year with a January trip to San Diego for Sea Scout Adult Leader Training…AKA, SALT.   It was mostly great networking and seeing how other ships and regions run.   And we got to meet and chat with the National Sea Scout Commodore Charlie Wooster

Of course, any time you get trained…there’s more to do.  Karin became Commodore of the Chief Seattle Council Sea Scout Fleet on February one, and this spring somehow I got appointed to a new Western Region Sea Scout committee working to improve the training materials for all ships.

On top of that, we’re still trying to make sure the Sea Scout Ship Yankee Clipper continues to operate.  We are strong in our Woodinville Crew, but still struggling to built the Seattle Crew.  We still need some extra adult volunteers to really make Seattle hum.  But the boat is back in operation, participated in Opening Day May 2nd, and has been out sailing.  She’ll be on long cruise later this summer.

Karin and I are still sailing when we can. Marie is doing very well. All systems perking along.  And the only one not working, the speedometer, I’m about to fix.  The company that made it is long gone, but some of their ex-employees are still making this stuff….and sold me a transducer that should just plop in to the hole….and work just like the old one did….well, like it did when it used to work.  You get the idea. 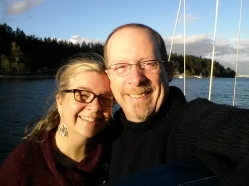 Christian has met the most lovely woman. Carol is a nurse at Swedish. They have been dating since February.  I don’t want to say much as I don’t want to jinx anything, but she’s a joy and I hope their relationship continues to blossom.

Work is perking along at West Marine.  In addition to being Sales Manager for the Seattle Store, I’ve been named Electronics Specialist.  So I also went to California for some added training.  What’s not to like. I’m building fun systems that are essentially computers to give boaters a view to the information they want.

We just had a great event to fund raise for some of Gareth’s uncovered medical costs.  Thank you Stew and Connie Navarre who gave the venue and all the food.  And to all the friends and new friends who came to help out….by having a great party at the Georgetown Ballroom. 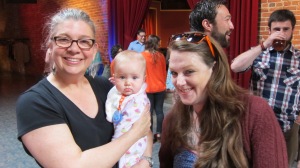 That’s is for now.  In a few weeks we’re off to New York for Jamie’s wedding.  Now that should be good for a post or two.