So there was a story today on MSNBC about cheese…(see below)….and it got me to thinking.  Just what is Jamie doing there at Murray’s Cheese on Bleecker street in NYC?  We thought it was just Jamie finding her way. But there may be something more sinister. Sure she looks like a nice friendly cheese-monger. 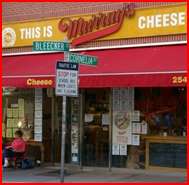 But didn’t we learn in “Dead Men Don’t Wear Plaid” that some cheeses can be used to create weapons of mass destruction? Sure, you laugh, but that’s what the people living on the island of Carlotta did before their homes were melted by a particularly nasty strain of Limburger.

See further down for photographic evidence that Jamie sometimes gets a little crazy. Something to think about when you buy your next wheel of Brie or Camembert

All we can hope is that she has this out of her system by the time we get to Camp in the high Sawtooth Mountains of Idaho this summer.

Cheese — it’s grosser than you thought

Cheese makes some foodies jump up and down like little kids, but behind that heavenly taste and texture lie bacteria, mammal stomach lining, pesticides and pure fat.

To ripen cheese and add flavor, bacterial strains are freely injected and smeared into the substance. But not all have been accounted for, a new study finds.

Researchers at Newcastle University in England have now identified eight previously undiscovered microbes on the French, brie-like cheese called Reblochon. The potential benefits of these new microbes are still unknown.

The study is detailed in the December issue of the journal International Journal of Systematic and Evolutionary Microbiology.

Flourishing microbes are consumed with every bite of cheese (though the cooling temperatures in refrigerators do slow down bacterial growth, they do not kill them in cheese or in any other food). Bacteria (either naturally swimming around the milk or manually injected) and enzymes derived from the inner stomach linings of any slaughtered milk-producing mammal (called rennet) are added to coagulate the milk into curds.

Two proteins arise from curdled milk and manufacturers capitalize on them: The first is whey, which is essentially leftover liquid from curdled milk (and is increasingly being used as an ingredient in producing other foods). The second is casein, which makes up the bulk of the solid part of cheese, along with fat.

Fat is what gives cheese its taste, and 70 to 80 percent of the calories in cheese come from pure fat.

Factories are adding more bacterial groups into cheese to achieve enhanced flavors, meanwhile disinfecting their products at the same time with high levels of pesticides while remaining under government standards.

"Virtually 100 percent of the cheese products produced and sold in the U.S. has detectable pesticide residues," according to the Food and Drug Administration.

Cheese might be a hot commodity, but like other dairy products, it can have some unhealthy aspects. Other ways to get your calcium fix include eating the following foods: fortified grains, kale, collard greens, mustard greens, cabbage, kelp, seaweed, watercress, chickpeas, broccoli, red beans, soybeans, tofu, seeds and raw nuts. With all that variety, there’s hope for any cheese addict. Only it won’t taste, or smell, the same.