One thing about living in Ballard is that when it’s nasty weather everywhere else in the Puget Sound we usually are spared. We’re tucked behind the Magnolia bluffs at just about the lowest elevation in Seattle.  So, blow you winds on the Cascade front, rain and snow in the convergence zone. We’re usually fine.   But this morning, we’re hammered along with the rest of the region. We have a pile of snow seven inches deep on the table on our balcony.

But it looks pretty with the all the Christmas lights I put out there last week, so Karin and I just opened the curtains on the bedroom, which look out onto to deck, and snuggled under a down comforter.

So it was pretty rude for the fire alarms to go off at midnight.  Someone down on the second floor was having a little trouble with their popcorn making…and the fire department rolled.   When you wake up, it takes a while to figure out what’s happening…but eventually you realize…Oh, the building is burning down…I better leave.  We bundled up, made our way down the stairs, and trudged out into the height of the blizzard. Nice way to meet the neighbors. Too bad the folks on the second floor didn’t make a new batch to share with the crowd

Sunday morning there was so much snow we didn’t even make it to church.  But we make breakfast and around 10am we ventured out to see if anyone was brewing java. We have our needs.   And while there’s lots of snow and ice around, some of the stores in Ballard are opening up mostly as normal today.  We thought to ourselves, “Well sure, the coffee shops are open…but if Ballard is really tough…then then Sunday farmers market would be open too.”

Oh, I guess this is a tough hood

If they’re selling, we’re going to buy something…just to salute the internal fortitude it takes to make it down here with your wears and set up shop on a snow covered street.  And we decided, Yes, we could do oysters for Sunday supper. Mmmm!

We decided to make use of all this snow on our deck…to chill a little wine to go with the Oysters. Nice. 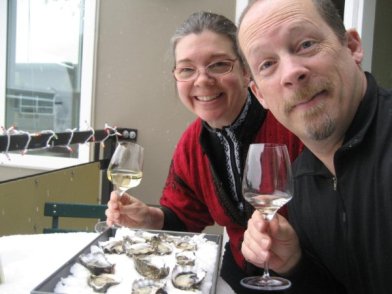 You know I’m starting to think being snowed in isn’t such a bad thing after all.

One thought on “Blizzard in Ballard”